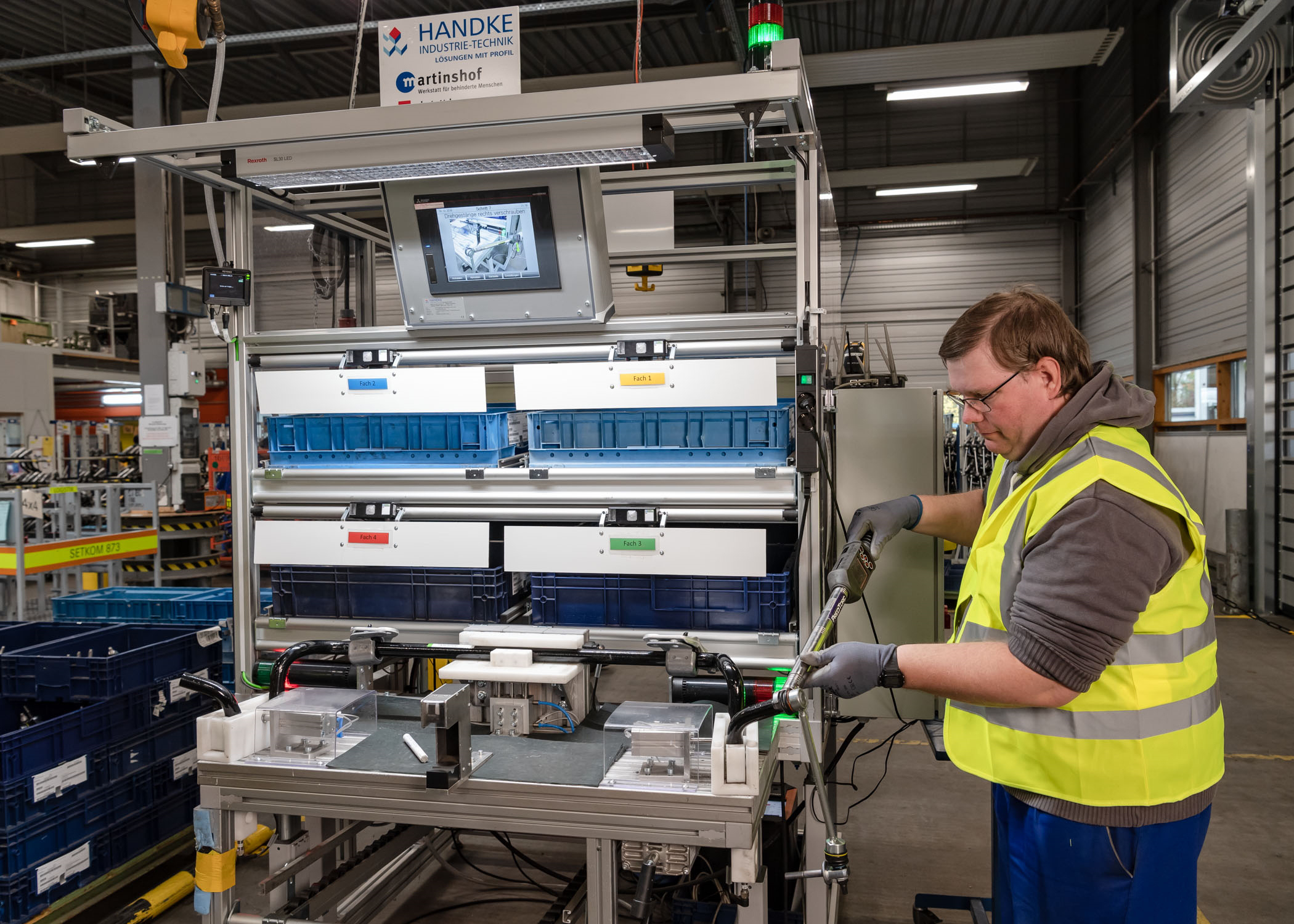 IN SPITE OF ADVANCING DIGITALIZATION, the following still applies: Manual workstations are indispensable, be- cause automation is not always profitable with small batch quantities or complex processes. Such workstations are preferred at the Martinshof Werkstatt Bremen, a sheltered workshop for a mixed workforce including people with handicaps, as they are ideally suited for integrating persons with physical or cognitive handicaps into working life.

“Poka Yoke has empowered our workers,” said Miriam Berger, in charge of Production Planning, Martinshof Werkstatt Bremen. “We use automation to avoid mistakes that previously occurred in the production process. Everyone must be able to work smoothly together.”

The Japanese Poka Yoke principle, which aims at the systematic elimination of human errors, coupled with Mitsubishi Electric’s “Guided Operator Solutions,” ensures high quality for Martinshof ́s customers, which include well-known automakers in the region.

With some 2200 employees, Werkstatt Bremen is one of city ́s largest employers as well as Germany’s oldest and largest workshops for people with and without handicaps. Apart from job order and contract production in the fields of metal and woodworking, electrical assembly, filling, and packaging, Werkstatt Bremen employs 500 workers alone in the automotive business sector, and has been supplying local automakers for more than 30 years.

Handke Industrie-Technik, a long-standing supplier to Werkstatt Bremen of manual workstations, and a premium solution partner of Mitsubishi Electric, recognised the unique opportunity. Together with Mitsubishi Electric, Handke developed a Poka Yoke solution for adapted working. The prototype of the error-free workstation convinced the customer, and was installed in the production line. Since May of 2018, a total of four identical zero-error workstations are in use for automotive parts production.

“The main challenge of this project involved the integration of existing technology into the new error-free workstations,” said Nils Knepper, Senior Product Manager Modular PLC/Software at Mitsubishi Electric Germany. “However, thanks to the interfacing features of our Poka Yoke controller, this was not a problem.”

The MELSEC iQ-F series PLC, installed on-site in a small control cabinet, is the intelligent, individually configurable and expandable heart of the solution that controls the picking and assembly sequences. Apart from Mitsubishi Electric’s own components, the system can also handle third-party sensors and actuators. In this case this included the digital torque wrench and a system for industrial image processing. The connection of a barcode printer is being implemented, and thanks to existing conventional interfaces, this can be done easily by the PLC.

“During the design of the user interface, Mitsubishi Electric was highly flexible, and took all our requirements into account. Because many of our employees cannot read very well, we make use of smileys and other symbols,” explains Miriam Berger. “In addition to process reliability, the Poka Yoke workstations have the great advantage for us, unlike the past situation, as practically any employee can now do the job.” The supporting visualization mentioned uses a 10-inch touchscreen terminal connected in the background to the Poka Yoke controller.

The hardware and software solution from Handke and Mitsubishi Electric deliver simple scalability, convenient configuration, programming and commissioning as well as comprehensive connection possibilities (including MES and ERP). And as soon as freedom from errors is achieved, and the technical potential is available, Werkstatt Bremen will investigate whether the buffer store can be dispensed with in the future, so that after assembly is completed the parts can be directly shipped »in time» to the automaker.

Thanks to the Poka Yoke controller, existing technology, like a digital torque wrench in this case, can easily be integrated into the error-free process.

A further advantage is that we can use pictures to provide instructions. This especially helps workers who have reading or writing disabilities.

Wide Range of Components for Individualization

“The need to prevent errors exists everywhere during production and assembly,” remarks Andreas Kebbel, Managing Director of Handke Industrie-Technik. »What is most important is the quick and flexible adaptation to the needs of the persons working there, and to the requirements of the process.»

That is why Mitsubishi Electric and Handke offer their solution in the form of a modular system with a wide range of components and interfaces for operator guidance. Amongst others, these include mechanisms to ensure the correct picking of parts, e.g. light barriers, pick- to-light push buttons (alternatively: pick- to-voice), barcode scanners, and proprietary pick-to-door devices with stroke switches. Moreover, there are monitoring devices such as electric screwdrivers with torque & angle detection, plus vision systems as well as opportunities for robot integration. HMIs (Human Machine Interfaces) from Mitsubishi Electric’s GOT2000 series are used for displaying the individual process steps, offering direct connectivity to the Poka Yoke controller, and meeting every display requirement from text through graphical symbols up to animations and augmented reality. Depending on requirements, the latest generation iQ-R or iQ-F PLCs can be used as controllers for the guided manufacturing solutions. Mitsubishi Electric’s Guided Operator Solutions can be integrated in to production systems, so that workstations can be networked and resources controlled and monitored in realtime.

About WERKSTATT BREMEN
The Martinshof workshop in Bremen, Germany, is an in-house company of the City of Bremen. It is a recognized workshop that offers work and living opportunities for people with disabilities. The centerpiece is the Martinshof workshops, which manufacture various items in line with market requirements under a framework of professional support. The Bremen workshop employs around 2,200 people making it one of the largest employers for people with disabilities in Germany.