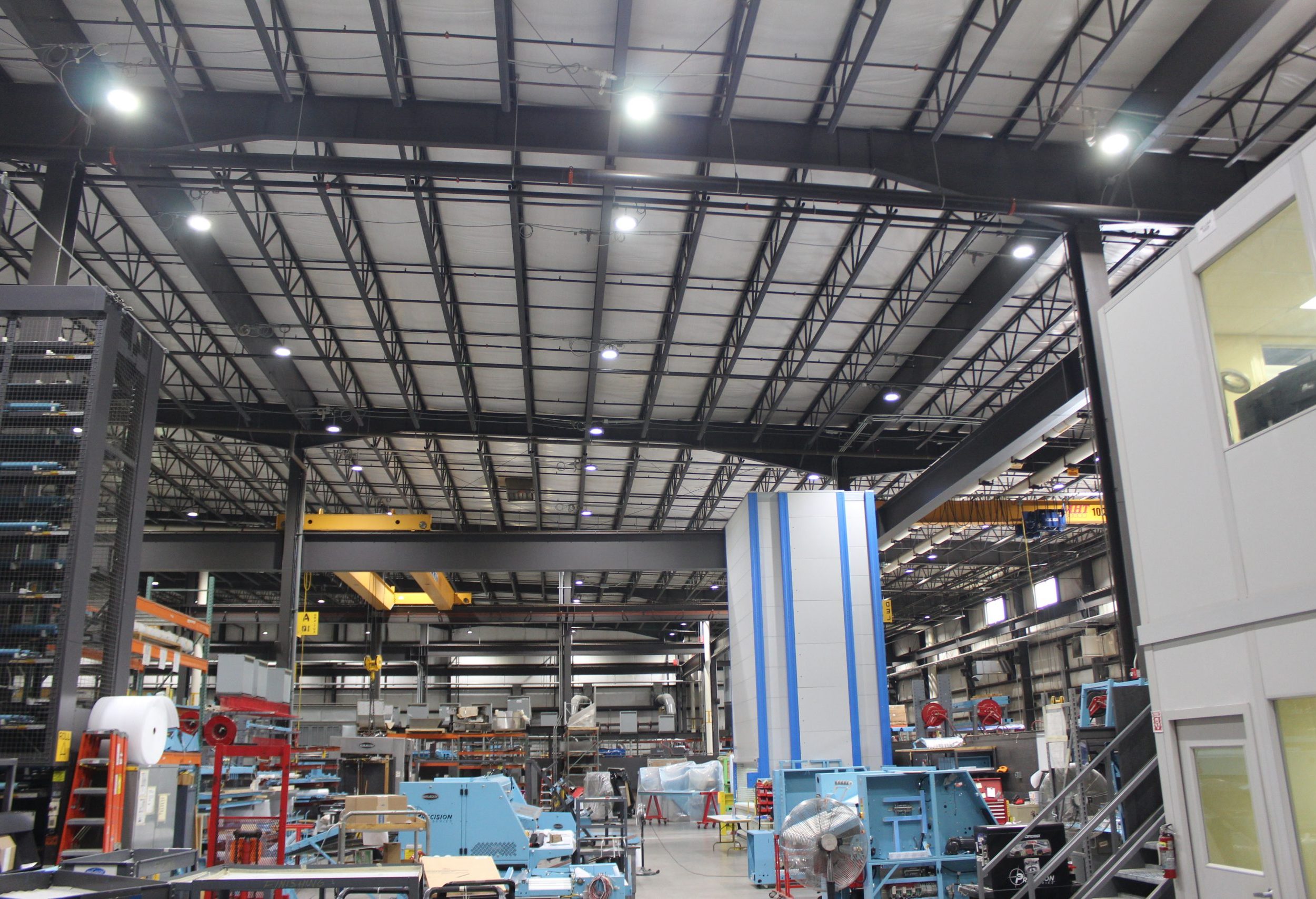 G.A. BRAUN IS A GLOBAL LEADER in the design and manufacturing of commercial laundry and textile equipment. Over the past 75 years, the company has built a global reputation for innovation, quality construction and customer satisfaction.

To meet growing demand for its state- of-the-art systems, the company recently added a massive, 100,000 square foot expansion to its existing North Syracuse, NY facility, adding much-needed fabrication and assembly space. When it came to choosing lighting for the facility, David Welsh, director of operations, says the company had some stringent requirements.

“We’d just switched our existing facility over to T5 fluorescents about 4 years earlier but that was already becoming a problem,” Welsh said. “The T5s were a maintenance nightmare. The bulbs dimmed after the first year, and they were so cheaply made the bulbs would sometimes actually fall right out of the fixture.”

Unfortunately, the T5s weren’t cheap to maintain. With six bulbs per fixture, plus two starters, the systems were very expensive to replace and repair. Braun was spending about $6,800 a year to change out T5 bulbs, not to mention the storage and disposal of the tubes was also an issue.

As the bulbs dimmed and failed, visibility inside the facility dwindled quickly, which created a quality assurance problem. “It was so dark in the old facility, we risked having a lot of defects going out in the field,” Welsh said. “We needed good lighting for our assemblers to be able to inspect the paint and assembly on our products in order to maintain our high standards.”

“With the new building, we were determined to find a better lighting solution,” he added.

As the addition neared completion, Braun installed 9 LED fixtures from 4 different suppliers throughout the facility to test their output and durability, including Dialight’s 18K Vigilant High Bay fixtures.

“With the Dialight fixtures, the distribution of the light was just so much better and produced the least amount of shadows of any of the manufacturers,” Welsh said. “Plus, no one could beat the Dialight 10-year warranty; most were just 7 years.”

In fact, Welsh says Braun was so impressed with the output, distribution and reliability of the Dialight fixtures, they decided to also replace the T5s in the original building.

Taking advantage of a $60,000 rebate from NYSERDA for the retrofit project and a $70,000 rebate from National Grid for the new construction, Braun installed 320 retrofit and 276 new construction fixtures, for a total of 596 Dialight 18K Vigilant industrial LED high bays. In the new facility, Braun opted to add Dialight’s wireless network controls to operate the lights automatically. This way, if someone forgets to turn the lights off at the end of the shift, they’re programmed to go off automatically at a designated time, reducing burn time, energy waste and electricity cost.

In addition to enjoying an outstanding quality of light and better visibility, Braun has also realized a substantial savings beyond the utility rebates. The company is saving $51,000 a year in electricity alone, plus nearly $7,000 in maintenance costs by eliminating the need to constantly replace the T5 bulbs and fixtures. And, they no longer have to worry about lights randomly falling from the ceiling for an added safety bonus.

Meanwhile, the workers at Braun have been really impressed with the improved lighting, Welsh said. Now, when visitors come in, they all comment on how bright and clean the facility looks, and with much better visibility, Braun can be more confident in the quality of its products going out the door, all of which reinforces Braun’s industry reputation.

“You know, those T5s in the original building were my idea, and they’d only been in place about 4 years. They were the best available at the time,” Welsh said. “So, it wasn’t an easy sell to convince the owner of the company to rip them all out and replace them with LEDs. But the difference is outstanding, and we’ve been very pleased with the results.”

“I’ve had nothing but a good experience with the Dialight fixtures and the Dialight team,” Welsh says. “For anyone who’s facing the same maintenance disaster I was, I recommend upgrading to Dialight’s fixtures. You’ll be very happy with the results.”