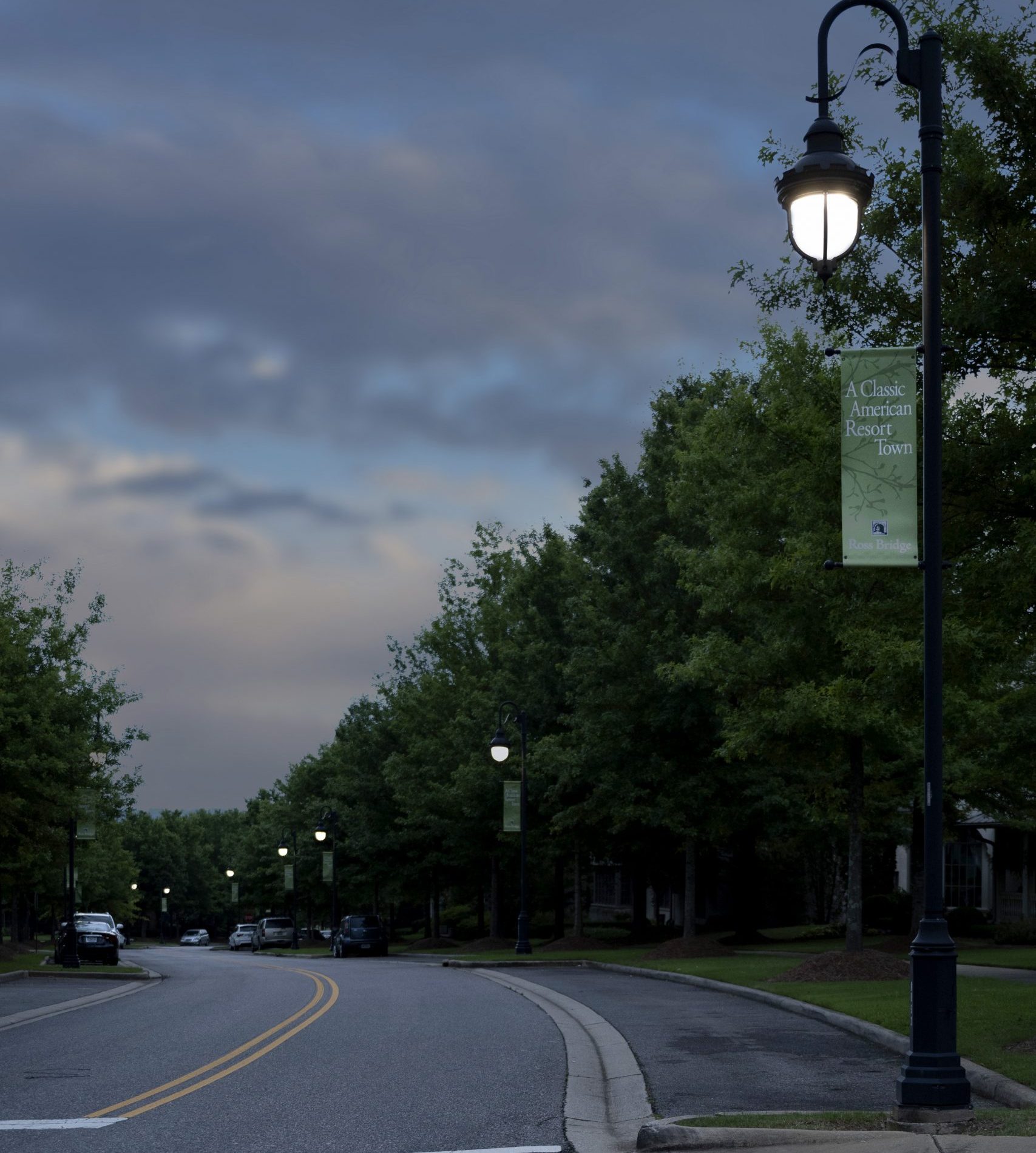 THE ACCLAIMED RESORT COMMUNITY of Ross Bridge, located in Hoover, a suburb of Birmingham, Alabama boasts the third longest golf course in the world. Elegant amenities, beautiful outdoor spaces and stunning views delight its many visitors and residents. When the developer designed the streets in the Ross Bridge Village Center, they purchased and installed the Lumec Ancestra decorative streetlights that are in operation today.

The stylish pendant and post top fix- tures used 175W metal halide lamps, the leading choice at time of construction. The light quality of metal halide is still popular, but the energy consumption and the maintenance to maintain it less so.

Several years ago, Wayne Lewis, a Ross Bridge Village Center resident who is retired from a local electric utility, noticed the streetlight across from his house had gone out. As part of his previous job, Wayne had designed several street lighting projects for the City of Birmingham, Alabama.

“I worked with the property manager in order to get the lamp in the fixture across the street replaced. It lasted six months and went out again,” said Wayne. “In my experience this seems indicative of a ballast problem. I suggested they replace the ballast which they did. The light lasted a year before the ballast had to be replaced again.”

Over time, other streetlights began to go out, costing the Homeowner’s Association a couple hundred dollars each time a contractor replaced a ballast. “Even then, the ballasts didn’t last. It was getting expensive.” Wayne spoke with his contact at Associa-McKay Management, the Ross Bridge HOA management company. “They had already gotten a quote from a company to replace all the lights with LED, but it was going to be expensive. We didn’t have the money in the budget, and I had a lot of questions.” With permission from the management company, Wayne consulted with a lead engineer at Alabama Power concerning their issues. “He suggested to me, if you want to go with LED take a look at the Evluma OmniMax. So I did.”

Like any lighting project it is important to understand the expectations and requirements when it comes to updating decorative outdoor HID lighting to LED. Energy savings is often the leading concern, with maintenance saving second and the aesthetics frequently last. For Ross Bridge, the need to engage a contractor to service the lights put the maintenance savings qualities of LED first. This meant an easy-to-install lamp with robust electronics and a long-life driver in place of a traditional ballast. The need to fit a specific fixture and match the light quality was also a requirement. The aesthetics needed to match community expectations.

For LED retrofits there are multiple options, yet few are long-life, utility-grade products backed by a 10-year comprehensive warranty. Extreme heat can shorten LED lifetime. A lamp’s ability to thermally manage itself directly contributes to lifetime. Thermal protection circuitry, the means by which the lamp monitors its own temperature, in addition to active and passive cooling should be taken into account, especially when working with closed fixtures. Reviewing a payback calculator from the manufacturer along with TM-21 data and L70 lifetime expectations can give project managers the information they need. Photometric files including spectral power distribution, or a measurement of the lamps CCT, can indicate overall look and visual performance. A sample test install provides a valuable on-site perspective.

Working with Neil Patterson of Gresco Utility Supply, Wayne obtained two samples of the 70W OmniMax. The lamps were installed at the beginning of 2019. The differences in light quality between the original metal halide lights and the OmniMax were indistinguishable. He also tested a competitor’s 80W ‘corn cob’ style lamp. At 80W “the competitor’s lamp put out more light, but the labor to install it was significantly greater because the diameter of the lamp was such that it wouldn’t fit normally. We would have had to take the fixture apart to install it. The OmniMax easily fit the opening.” A retrofit kit option was also considered from yet another vendor, but the cost was too high and the two-part lamp and driver installation was too complicated. “The OmniMax 10-year warranty was also a plus. The others simply had a 5-year warranty.” Gresco facilitated the final Ross Bridge HOA OmniMax order. “Neil was great to work with,” said Wayne.

Released in 2016, the OmniMax has been thoroughly field-tested by Evluma’s core customer base of electric cooperatives. With the large number of historic and decorative light fixtures on university campuses, planned communities, HOA’s and municipalities, the OmniMax has grown in popularity because of its soft, diffused light, ease of installation and long lifetime. It’s novel radial light engine places the burn center at the same location of a traditional HID filament utilizing the refractive optics and materials as originally intended. The OmniMax comes in six different color temperatures ranging from 2000K-5000K CCT. Ross Bridge chose 4000K for their project.

A total of 158 fixtures were updated from 175W metal halide to 70W LED OmniMax as of March 2020. The Ross Bridge fixtures are controlled by contactors at seven service points, each with a single photocontrol. From 10 to 50 fixtures are controlled by each contactor. Dimming was not a requirement, so the HOA chose the OmniMax Standard. The LED OmniMax will save 60% in energy costs, approximately $8,535 annually or $85,535 over the warrantied life of the lamp. The expensive maintenance required to change out metal halide ballasts and lamps are a thing of the past, saving $4,125 annually. Moving to OmniMax from metal halide will save $12,657 a year, a three year ROI.