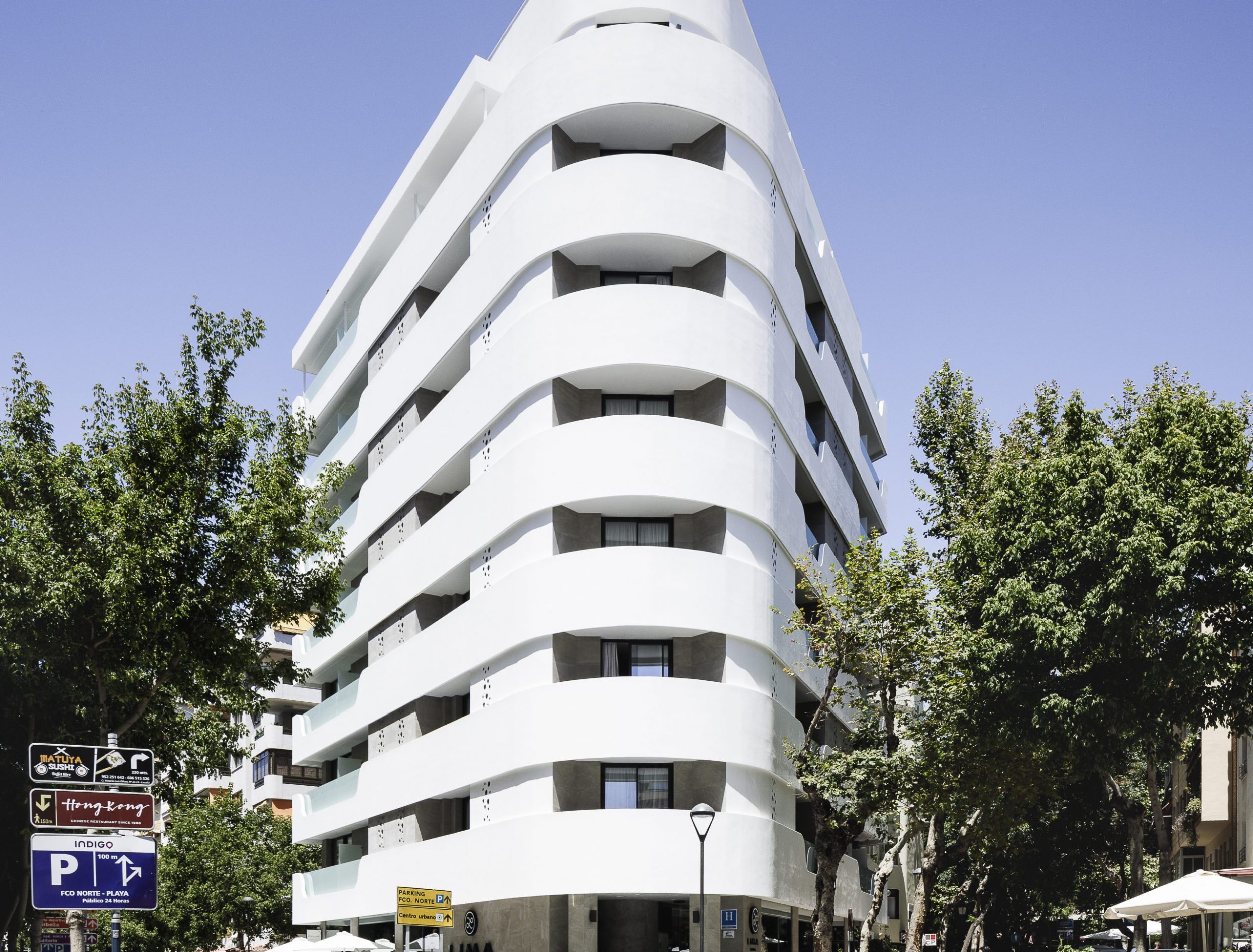 THE FACADE LIGHTING for the four-star Hotel Lima Marbella in Spain needed to be upgraded as part of general renovation work.

The project partners looked for a wireless light management system that would add dynamic control and RGBW colors to the existing outdoor lighting without major structural modifications. They found it at lighting control specialist Tridonic.

From as far back as 1965, Hotel Lima Marbella has been offering its guests first- class service and an ideal base for exploring and relaxing. This four-star hotel is located in the heart of the Spanish coastal city of Marbella, within walking distance of the old town with its narrow streets and trendy boutiques, as well as the beach and the marina.

The main challenge of this project, developed by the Spanish architectural firm of T10, was to completely renovate the existing hotel without increasing the built volume or the height of the original building. To achieve that, a double skin was created to envelop the building, giving the hotel a fresh appearance and emphasizing its outer perimeter with horizontal bands at every level providing balconies for the rooms.

At night, a dynamic lighting system turns the facade into a vibrant design element.

Another addition that has changed the appearance of the hotel is the rooftop bar and pool area with incredible views of the beach and the hills nearby.

In the course of the complete renovation of this popular destination under the auspices of the Spanish architectural firm T10 and the lighting designers of Vbo- spagna, the facade lighting of the six-story building was also to be modernized and equipped with RGBW colors and dynamic lighting control. Since the hotel’s facade was already illuminated with LEDs, the lighting designers were looking for wireless technology that would integrate easily and seamlessly into the existing installation.

“To make the building a real eye-catcher, the new system had to not only provide colored lighting and dynamic color changes but also allow the six floors to be illuminated independently of one another. Different color scenes were also required,” said Marta Jiménez, Area Sales Manager for Andalucia region at Vbo. “What was particularly important to our customers in this project was that the lighting could be reconfigured at any time – even remotely.”

In view of these specific requirements, the lighting specialists at Vbospagna consulted with the clients and opted for the basicDIM Wireless light management system from technology partner Tridon- ic. Bluetooth-based control technology allows a wide variety of interaction with all the connected luminaires – without the need for additional wiring. The existing outdoor LED luminaires merely had to be equipped with basicDIM wireless modules and corresponding drivers. The system is operated via the 4remote BT app (available for iOS and Android) or the basicDIM Wireless User Interface, a battery-powered wireless wall switch. The wireless modules have gateway functionality so there is no need for an external gateway.

Up to 250 light points can be controlled via Bluetooth with Casambi-ready basic- DIM Wireless technology. The necessary wireless communication network is automatically set up by the wireless modules. Between the end of 2019 and January 2020, 54 basicDIM Wireless modules and 54 constant-current LED drivers from the Tridonic EXCITE series were installed on each of the six stories of Hotel Lima Marbella. Luminaire grouping and configuration of lighting scenes are now just as convenient as on-off switching and dimming. It was also possible to integrate RGBW color control in the system.

Hotel Lima Marbella reopened in July 2020 with an entirely new look – both inside and out. Guests found a fully renovated hotel with a stylish interior, rooftop pool and modern technology. The designers placed particular emphasis on automation. For guests, the entire process from checking in to opening their room door is contactless via their smartphones.

But the undisputed highlight of this modernized four-star hotel is the dynamic, colored facade lighting which extends over all six storys of the corner building. The basicDIM Wireless lighting can now be easily adjusted and adapted with a high degree of flexibility.

“We are extremely pleased with the results. The facade is the new hallmark. It’s a real eye-catcher,” said Javier Bernal, a member of the T10 team. “We have been particularly impressed by the underlying technology. Tridonic’s system was quickly installed and didn’t require any additional cabling or gateways. The lighting can be changed at any time and the hotel managers can adapt it any way they like.”