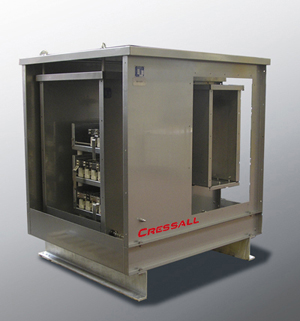 THERE’S A LOT TO BE LEARNED from the famous fable, The Three Little Pigs. While the tale teaches us to stay wary of menacing wolves, it also reminds us of the importance of a sturdy home. Electrical equipment requires robust protection and a durable enclosure is vital to its safety. Here, Andrew Keith, product development director at power resistor manufacturer Cressall Resistors, explores the top considerations when designing an effective enclosure.

However, it is this misconception that leads to failure — especially if important design considerations are forgotten or unfulfilled. Although enclosures can seem like a non-critical element in electrical system design, a failure to secure electrical equipment can result in a build up of moisture or dirt, a drastic change in temperature and poor ventilation.

When designing a heat management system for an enclosure, manufacturers must account for external temperature fluctuations such as solar gain — heat from the sun. In addition, electrical equipment can generate significant heat as a by-product of their operation, known as losses, inside the cabinet. Failing to safely remove these losses will increase the temperature inside the enclosure and could adversely affect its contents.

One remedy is passive cooling. This technique uses the simple principal of convection to distribute heat from a higher temperature area to a lower one. To do this, enclosures must be designed with strategically placed vents that replace hot air inside the enclosure with cooler, external air.

However, the feasibility of passive cooling depends on its environment and the ambient

STAINLESS STEEL PROVIDES A MUCH HIGHER RESISTANCE AND VARIANTS SUCH AS GRADE 316 ARE SPECIFIED IN INDUSTRIES THAT REQUIRE RESISTANCE TO CHEMICAL ATTACK, SUCH AS PHARMACEUTICAL MANUFACTURING, WHICH MUST AVOID EXCESSIVE METALLIC CONTAMINATION.

Of the numerous materials available for electrical enclosure construction, each offers its own protective benefits. While painted carbon steel is the most cost-effective metallic choice, it has limited resistance to solvents, alkalis and acids and is thus best suited to indoor applications.

Stainless steel provides a much higher resistance and variants such as grade 316 are specified in industries that require resistance to chemical attack, such as pharmaceutical manufacturing, which must avoid excessive metallic contamination. As the material has better resistance against sulphates, seawater and high temperatures, we recommend this type of steel as the preferred choice for both indoor and outdoor applications.

Away from metals, fiberglass is a lighter weight choice, making it suitable for wall or pole-mounted installations. As fiberglass is not conductive, any open circuits would stay safely inside the enclosure and wouldn’t be transmitted through the material. The conductivity offered by a metallic enclosure enables it to be ground connected to reduce the risk of electrical shock should an exposed conductor come into contact with the enclosure.

Many manufacturers design and build enclosures at a central location, such as Cressall’s facility in Leicester, before shipping the equipment to the end user. For an enclosure to comply with local guidelines, manufacturers must consider its end destination. Standards typically referenced are the International Electrotechnical Commission (IEC) 60529 Specification for ingress protection (IP) for countries using IEC standards, while the applicable EN standard should be followed for the European market.

Understanding these regulations can be daunting, which is why manufacturers should work alongside their customers to advise on the most effective solution. If the IP rating is too high, for example, it will place tighter restrictions the openings in the enclosure panel work and restrict ventilation.

Enclosures should only be opened using a key or tool and when all live parts are disconnected. Installing a viewing window reduces the need to access inside the enclosure. Other safety features include interlocking the enclosure door with a disconnecting device to prevent direct human contact with equipment, should the door need to be opened.

The considerations for enclosures extend beyond straw, sticks and bricks. However, if designers are to learn anything from the pigs, it is that we should never underestimate the value of a home’s materials. Enclosures may seem like just a box, but they play a vital part in equipment protection and their design needs to be carefully considered.

Editor’s note: If you want to ensure you keep up to date with press material, opinion focussed blog content and case studies from Cressall Resistors, you can subscribe to receive the company’s Blog posts by e-mail here www.cressall.com/category/blog.

ABOUT CRESSALL RESISTORS:
The world’s foremost power resistor manufacturer, Cressall Resistors, oers an unrivalled combination of experience and expertise as well as the UK’s widest range of resistor technologies. Cressall’s customers include ABB, Siemens, Areva and Alstom, as well as major utilities such as Northern Powergrid and Western Power Distribution (WPD), EDF and Scottish Power. The company also works with countless smaller specialists such as CP Automation, HMK Automation and Drives and ACE Winches. Indeed, because of the fundamental nature of Cressall’s product almost everyone in the electrical industry will have cause to contact the company at some point; making the Leicester based business a bellwether for the health of the sector itself.