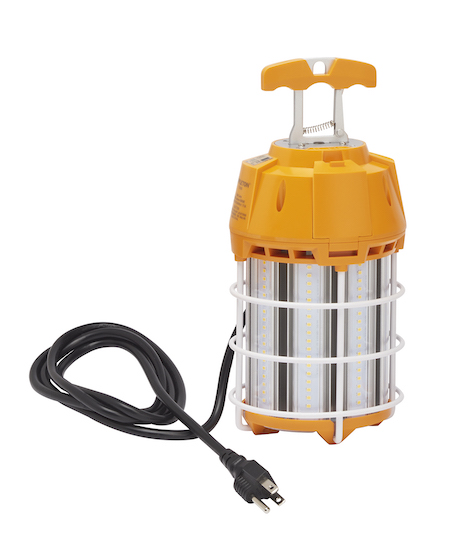 Installing an Emerson Appleton™ TL100C LED temporary work light gives contractors extremely bright, energy-efficient 360° illumination that is superior in performance to traditional High Intensity Discharge (HID) temporary fixtures or incandescent strings of lights. Plus, because the TL100C relies on LED technology, there are no moving parts or replaceable components, making it a true maintenance-free solution.

Built rugged for installation in construction and renovation sites, maintenance rooms, storage spaces and damp location rated areas, this 100W LED fixture yields daylight white 5000K light output of 12,000 lumens that is the retrofit equivalent of a 400W HID, yet requires less than 25 percent of the energy. As a result, only nine TL100C fixtures are required for full coverage of a 100 square-foot space at a 15-foot mounting height to meet OSHA minimum illumination standards. In addition, the LED technology provides the Appleton TL100C with an L70 rated operating life of 54,000 hours, saving the end-user maintenance time and expense. With no bulbs to break or replace, the Appleton TL100C light is always ready for work.

The Appleton TL100C fulfills commercial and industrial temporary lighting needs with its heavy-duty construction — including a high-strength polycarbonate top and bottom, 6000V surge protection to prevents damages caused by unstable voltage, aluminum heat sinks, and painted steel guard – to absorb shocks, vibration and rough use. Although rugged, it weighs a mere 4 lbs. and its low-profile measures less than 11 inches, so it stays up and out of the way of work activity.

Another key advantage to the TL100C is its daisy-chain feature that enables up to six 100W units to be linked up. Each unit has a built-in NEMA 5-15R receptacle, along with a 6-foot cord with a NEMA 5-15 plug, that connect in series to create a string of lights. A metal cable clip secures the plug when units are linked, while a door blocks off the linking port when not in use.

Backed by a five year warranty, the Appleton TL100C is cULus Listed and OSHA compliant for general construction area lighting (OSHA 1926.56) in the United States, plus meets CSA standards for portable lighting in Canada.