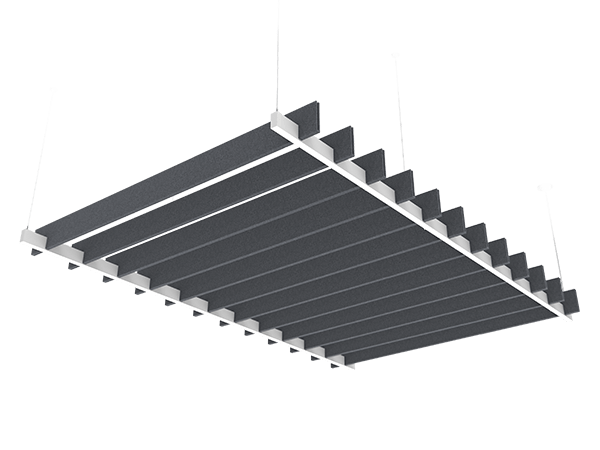 With AirCore Bridge, its new integrated ceiling system, Focal Point provides specifiers flexibility in designing for optimal sound management and lighting with linear baffle and luminaire arrays. AirCore Bridge spans light and sound by leveraging the acoustic performance of AirCore Blade and the powerful light engine of Seem® 1 with a variety of configurations that enhance architecture and human comfort.

AirCore Bridge is offered in three configurations: Truss, Cantilever and Cantilever Wave. Each uses the Seem 1 Suspended Direct luminaire as the primary structural support for the AirCore Blade baffles. Truss is a symmetric assembly where two Seem 1 luminaires running parallel constitute the rails that support perpendicular baffles, eliminating all baffle suspension points for quick and easy installation. Cantilever, as the name implies, has the acoustic baffles projecting from one linear luminaire with a suspension point at the other extremity, yielding the appearance of the baffles floating in the ceiling. Cantilever Wave adds to the visual effect with uneven length baffles resulting in a jagged edge at the suspended extremity. The slim apertures of the baffle and luminaire further contribute to the lightweight aspect of the structures.

“The new AirCore Bridge system truly exemplifies what a company that’s been involved in architectural lighting for over a quarter of a century can bring to this new and expanding integrated acoustic ceiling and lighting systems’ market. The quality of light is paramount and satisfies the expectations of lighting consultants, and the integration with our high-performance acoustical baffles is seamless,” states Michael McCoy, Director, Architectural Systems. “We leverage the strength of our engineering and manufacturing teams to provide integrated solutions that deliver performance, design flexibility, integration into interior architecture and, ultimately, enhance occupants’ comfort.”