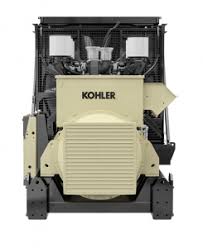 Kohler Co. is pleased to release the top end of the much-anticipated KD Series diesel-powered generator sets that represent its most powerful generators on the market today at 3500kW and 4000kW (60Hz) / 4000kVA and 4500kVA (50Hz), respectively, and all powered by the KOHLER KD103V20 diesel engine.

Today, based on a strong worldwide market response and an increasing demand on power in mission critical applications such as data centers, hospitals and water treatment facilities, KOHLER expands the top end of the KD Series with the rollout of these new 3500kW and 4000kW models.

Building on the proven excellence of the KD Series product line, the new generators are designed to deliver extreme durability and ultimate reliability in a variety of emergency and prime applications. This release expands the limits of standby generators and sets KOHLER apart with its breadth of product in this range.

“We are pleased to reach the culmination of the KD generator series that was designed from the ground-up including the KOHLER diesel engine platform,” said Brad Meissner, product manager at Kohler. “With a 4-megawatt generator, KOHLER can now offer customers the largest and most power-dense standby generator in the marketplace.”

Developed by the company’s global team of engineers, the new KD Series 3500kW and 4000kW gensets incorporate a powerful and sophisticated K175 diesel engine – the KD 103 liter, 20-cylinder model. From a design perspective, KOHLER kept many of the engine components the same as the KD Series predecessors including the control system, fuel system, and cooling system, to name a few.

The modular design of the KD103V20-powered generator sets is a bit larger than its V16 and V12 counterparts and delivers unprecedented power density and unrivaled performance.